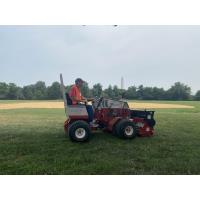 Smooth sailing is the report from Herbi-Systems President Kenny Crenshaw as he reflected back on his 17th journey to D.C.  He honors an annual volunteer commitment to the National Association of Landscape Professionals (NALP) Renewal and Remembrance beautification project
at Arlington National Cemetery (ANC).

"This year represented a new opportunity to serve and to get back to our mission,"
Crenshaw said. He also added that his first-time experience at the National Mall was enhanced due to the quality of employees with the National Park Service. He praised them as "first-class and extremely helpful." And he added that the NALP employees were "fantastic and very well-prepared." He singled out Vice President of Education and Professional Services Heather Parker; Associate Vice President of Events
Stacia Gueriguian; and Associate Director of Supplier Relations Laurie Lankford for excellence.

Crenshaw and Zerby managed two crews at the FDR and JFK athletic field sites in West Potomac Park, including parkland south of the Lincoln Memorial Reflecting Pool, as well as turf near the Korean War Veterans and Martin Luther King, Jr. Memorials.  Four John Deere tractors and one Ventrac (with Aera-Vator) equipped with implements to punch holes in the soil were brought in for tining aeration which alleviates compaction for root health.

"We primarily handled logistics in getting the aeration tractors from drop-off point to the tining sites.  Our volunteers were John Deere and Ventrac employees so that made our job easier. We were actually finished by 1:30 p.m. or less than 8 hours."

The other volunteer project at the NM included the spreading of woodchip mulch at the Washington Monument involving some 75 volunteers. Approximately 400 cubic yards or 30 truckloads of woodchip mulch was spread under the tree canopies by manual labor with shovels and wheelbarrows.

Opening ceremonies were held concurrently at ANC and NM. Although the Children's Program was suspended and Legislative Days on the Hill went virtual due to Covid restrictions still in place. Fewer volunteers overall were allowed by comparison to previous years, but the volunteer spirit was allowed to thrive in a brand-new place, through a new partnership about a mile away at the National Mall.

Crenshaw was NALPs inaugural Workhorse Award recipient in 2014. At that time, he had already invested more than a decade of service.

2021 marks the 25th anniversary of the Renewal and Remembrance event which took place July 19 at ANC.  For more information on NALP, visit https://landscapeprofessionals.org.  To contact Herbi-Systems, call 901-382-5296 or visit www.herbi-systems.com.