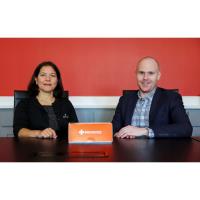 To the long list of medical devices created in Memphis, add the battery-powered pump that discreetly drains surgical wounds without the age-old accoutrement, the rubber bulb.

In early August, SOMAVAC Medical Solutions received a patent for its continuous negative-pressure “smart” pump. It’s as flat as an iPhone and is worn, attached by a belt, under the clothes.

Fluid from the wound is collected in a small plastic bag, marked with lines for measuring, attached to the pump. When it is full, the bag can be easily detached and thrown out or used as a sterile way to preserve the content for researchers.

“It is driven by a sensor, so it holds a given pressure setting,” said Esra Roan, CEO and co-founder of the company.

“It’s like a thermostat. Instead of you going there and turning it up and down, it holds the temperature for you. We are like that too.”

SOMAVAC has more than tripled its manufacturing space now to a 5,000-square-foot facility on Stage Post in Bartlett as it prepares to ramp up production and sales. It will cut the ribbon on its new facility Sept. 1.

Roan, a mechanical engineer by training, for years has been fascinated with surgical drains, specifically that there has been so little innovation to improve the Jackson-Pratt bulb, for decades the gold standard – nearly the only standard – for draining surgical wounds.

The rubber bulb worked well enough when patients stayed in the hospital until their surgical drains were removed. But with shorter hospital stays, patients are discharged with the drains intact and sent home to manage.

“They are not equipped. They feel intimidated, somewhat helpless sometimes,” she said.

“We launched a 24/7 patient support line,” she said. “We see ourselves not just as a medical device manufacturer but a full, comprehensive, post-operative, acute, drain-management company.” 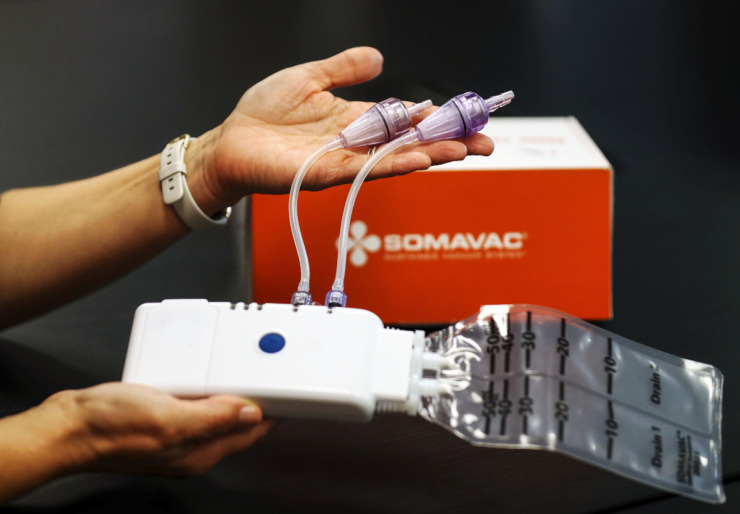 Esra Roan holds up a Somavac pump inside her office in Bartlett Aug. 17, 2021. (Patrick Lantrip/Daily Memphian)

Wounds that do not drain properly mean fluid can build up under the skin, causing seromas, which can be painful, slow recovery and require medical care.

The rubber bulbs have their own issues, including that when they are full, suction is diminished. They also have to be emptied.

“You have to pour from the bulb to a cup to measure the drainage,” Roan said. “Imagine pouring from a bulb into a cup something that is semi-solid. It is not fun.”

SOMAVAC, which has been selling its pumps for more than a year at A Fitting Place in East Memphis to women who had recent mastectomies, is now going after the hospital trade where surgeons will place the suction device as part of the surgery. If approved by the hospital, the pump will be reimbursed as part of the cost of surgery.

The technology is being used at St. Jude Children’s Research Hospital and the University of Mississippi Medical Center in Jackson.

Marc Walker, a Yale University-trained plastic surgeon from North Mississippi, is on the frontline in Jackson.

He expects the marriage of continuous negative pressure with drain technology will reduce post-operative complications, health care costs, improve patient outcomes “and hopefully take drain technology several decades forward because we’ve been lagging in the field for quite some time.”

Walker has spent years studying surgical drains, including the clinical benefit of continuous negative pressure on reducing the rate of seromas.

He also investigated how much suction the bulb actually creates.

“The suction power achieved by a bulb attached to a drain tube diminishes well before the bulb is even halfway full. When you boil it down, the real benefit of the bulb is just not to get fluid all over you. It is effectively a reservoir,” he said.

A hidden benefit and of great interest to him is the opportunity the device presents for the sterile capture of the fluid, allowing researchers to study it without contamination from being emptied into a container and carried into the lab.

“We can simply collect the bags,” he said. “It could help us see everything from cancer cells to the amount of certain inflammatory markers. It will give us insight into how wound healing is happening.”

Roan, who came to Memphis as a biomedical engineering professor at the University of Memphis, left the tenured position in 2015 to start the company with Herwig, then a master’s student in the department.

The two worked with the Memphis medical device accelerator, Zeroto510, to get FDA clearance. They now have other products in the pipeline.

“The patent is the backbone of our platform of solutions we are going to launch in the future,” Roan said.

Innova Memphis, a venture capital firm, and other believers have invested $645,000 in SOMAVAC, said Jan Bouten, a partner at Innova.

“Receiving the patent is great recognition of the uniqueness of SOMAVAC’s approach to the problem,” he said in an email.

He describes it as “an elegant solution.”

With FDA clearance, market acceptance, strong clinical data and what Bouten calls “patient delight,” he predicts the company will be positioned to be a “very attractive package for future investors or acquirers.”

SOMAVAC has six employees, including several who are part-time.

“Currently, we are raising $6 million. With that, we intend to be 13 people by the end of this year,” Roan said, “and 30 people in two years.

“This is the kind of growth and trajectory we will chase,” she said. “The Mid-South is our Region 1. We intend to launch six regions in the next two years.”